I just was caught by the justapositioning of this old entrance facade at the Whitney Bank vs the gleaming skyscrapers across the street. 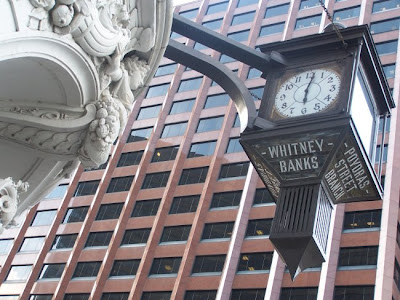 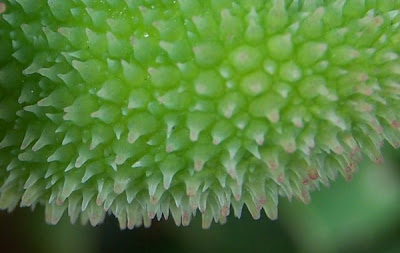 With the passing of the first Spring flowers comes the incubation of the seeds. I caught this seed pod (if that is the right name) walking down a side walk. Remind me to show some of the sidewalk pictures because New Orleanians love to fill their spaces with a primal sprays of colors. 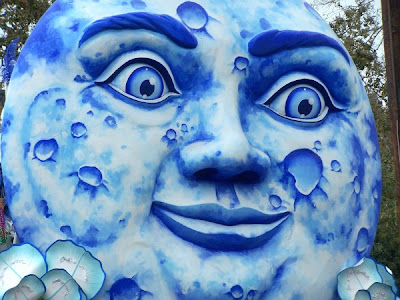 I pulled this one out of my files for today, since I am on the road. It's the face of a Mardi Gras float in from this year. I love the work and creativity these guys put into building these things.

--steve buser
Posted by Steve Buser at 8:51 PM No comments: 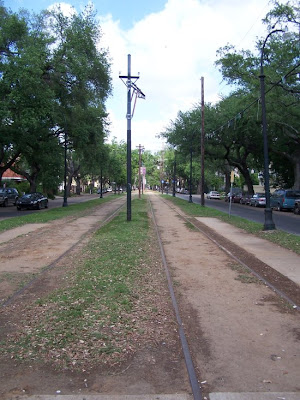 With the street cars not yet running on St. Charles Street (since Hurricane Katrina) you would expect the grass to be growing over. I saw this and wondered why. A few minutes later it hit me -- or almost hit me. I jumped out of the way to avoid being run over by a jogger. The joggers, walkers, strollers, et al, have taken to the median (in New Orleans parlance it is the 'neutral ground') -- not fearing being run over by the metal monsters.

Note the pole in the center of the neutral ground -- the side arms should stick out like a big 'T' -- over the rails -- and have wires running toward the camera. The work on replacing the wiring is proceeding well, but all takes time. Street cars are running on Canal Street and a few blocks off it it. 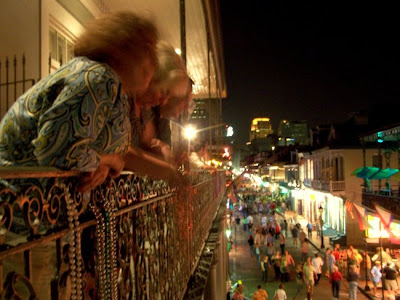 My wife and her family were enjoying interacting with the crowd on famed Bourbon Street recently from a French Quarter balcony of the Royal Orleans Hotel -- while this is a popular Mardi Gras pastime, there is never a time of the year when it isn't fun. It can be just a quick weekend get away. 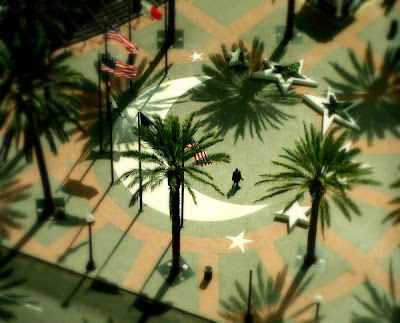 This courtyard in front of Harrah's provides a curious play of shadows when seen from above.
The Harrah's Casino is at the foot of Canal Street in New Orleans -- just across the street from the French Quarter. 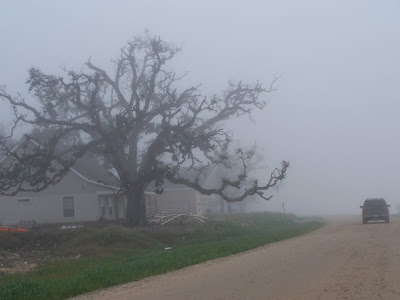 I caught this picture on day driving over in the Pass Christian, Mississippi, area along the beach. Notice that the tree is struggling to build its leaves and branches back. The houses are nearing completion -- everything along here was wiped out in Hurricane Katrina about 18 months before this picture was taken. The fog rolling in off the gulf and the passing truck add to the somber scene.
-- steve buser
Posted by Steve Buser at 8:00 AM 4 comments:

Rolling on the River 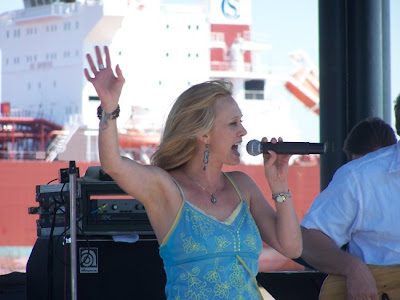 One of the charms of the French Quarter festival held in April are the stages along the river levee. Notice the ship passing behind the singer. It's a really pleasant day with more than a dozen venues and loads of vendors, foods and spirits.

There is no entry fee so we took advantage and spent the savings on souvenirs and some of the spicy food.
Posted by Steve Buser at 9:54 PM 1 comment: 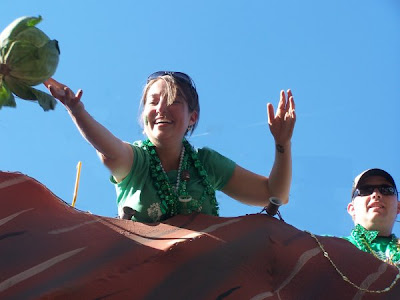 "Trow me sumtin, mistah" doesn't just ring at Mardi Gras in New Orleans. You could literally get enough vegetables to feed a large family for a couple of weeks at St. Patrick's Day parades.

This reveler tosses a head of cabbage at the recent parade along the St. Charles Avenue.

Labels: parades, things to do

Dusk View of the city 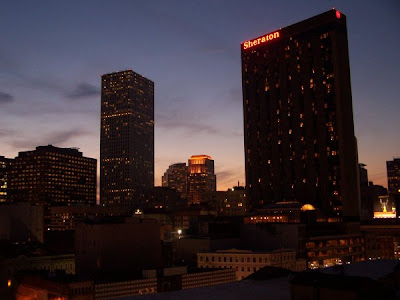 Every time you wake up and ask yourself, "What good things am I going to do today?", remember that when the sun goes down at sunset, it will take a part of your life with it.


New Orleans at dusk from the top floor of the parking garage at the Shops at Canal Place
looking north. The Sheraton is pretty obvious. The other tall building is One Shell Square. The building on the left of the picture is the Pan American Life Building. This is the view looking away from the Mississippi River.

Serenity is all around us.

Four of a kind 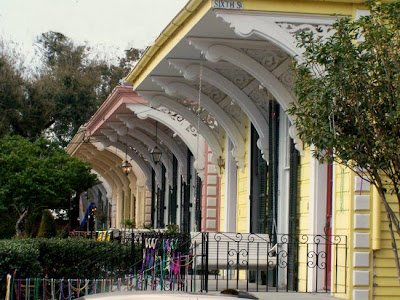 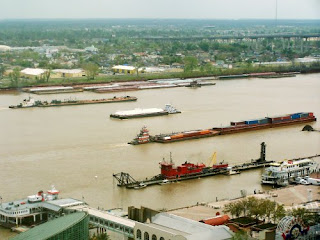 I caught this scene out my office window the other day of a lot of activity on the Mississippi River at the foot of Canal street.

Against the shore, the red boat is the Port of New Orleans' dredge. At the far bottom left is the Algiers ferry waiting for the river to clear before it takes off. And at the far right bottom is the Cajun Queen.

Quite a lot of activity at one time. Oh, one other thing. Find the barges with the containers -- the long narrow group in the middle. Follow them all the way to the right. See the brown half circle coming out of the river at the far left -- that's the plum of silt from the Port's dredge.
Posted by Steve Buser at 8:35 AM