Driving me out of my mind 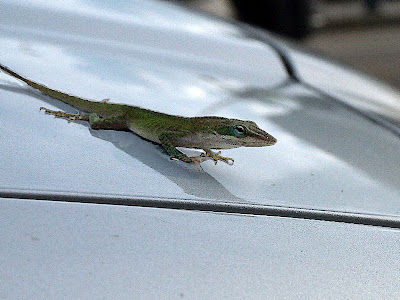 So I am driving home, down Poydras Street, heading out of town and this guy pops his head up and stares at me, like "hey, where did all the wind come from?"

I feel sorry for him, because he didn't sign up for the commute, but there is no place to pull over. It wasn't till I was in front of the Superdome before I could find a good spot.

Of course, then the ungrateful guy doesn't even have enough manners to to sit still for a portrait, so I had to jump out of the car and chase him around it -- I knew you would never believe this story with out visual evidence.

I finally caught this shot and then decided my new friend was probably not going to survive the Interstate. So there I am chasing him around the car, trying to catch him (camera still in hand). I am sure somebody called the police about the crazy guy playing ring-Around-the-Mercury.

Finally he was gone. I don't know if he jumped for his life, or found some nook or cranny. Enough. I had enough playing the photo-taking fool.

So here's the thing. I don't mind telling you about this, but I wouldn't want to have it leak out. Can we keep this just between us?

Thanks. I'll return the favor someday.

They are quicker than quick-silver, so do not worry.

Ha ha, very amusing. I just hope he was wearing his seatbelt!

That is what I miss about the South! Critters! Lizards, frogs, turtles, gators...

The story was funny, Steve and should leak out.

LOL! I wish someone managed to take your picture! =D

Hee! I hope he made it across the highway ok. Hopefully he'll find some new friends in this part of town.