Fogging down the river 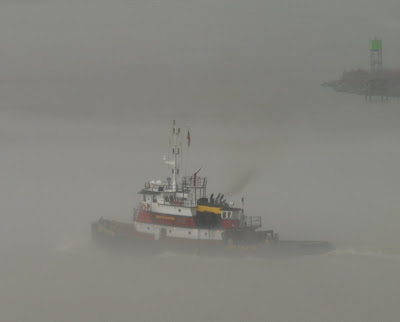 The section of the Mississippi River by the foot of Canal Street in New Orleans flows directly north-south for about 5 miles. So when a wind blows in off the Gulf of Mexico on a cool morning, it picks up the vapor off river waters and a fog blows down stream (north) and blows it right into the French Quarter. It's an amazing sight to see.

When the wind dies down the fog does, too. They both pick back up moments later. The forg actually rolls in waves sometimes.

Here a tug boat pilot makes his way down to his job. Once he gets around the bend, he'll probably have clearer sight. The green buoy light you see at the top is very near where the ferry lands on the Algiers side of the river.

Lagniappe -- ( a little something extra )

It's an all American tradition, But, when you have the mountains as a backdrop, it just seems a little more poignant.

Today on Pixel Eyed
Posted by Steve Buser at 8:42 PM

I just watch the movie "The Perfect Storm" last night...this makes me think of it!

I've always had trouble with capturing a great photo with fog involved. You've done a great job with this one. The depth of it with the small plot of land in the background gives it a great look.

Très joli. Another painting by Turner :-)

This could also be another suspense scene in your film noir series. :) Pleasant weekend to you.

This looks like a water color painting. I love it. Very moody and subdued. Nice composition.

Wow, now THAT is fog!

I love fog. It makes me feel at home and comfortable. I love this photo.