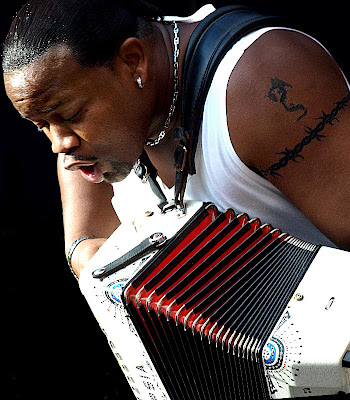 Billed as the Biggest Block Party in the world, the French Quarter in New Orleans is in full swing this weekend with whopping crowds. When they count the final numbers after tomorrow, I have no doubt this will be the largest crowd ever. We talked to one vendor who said that he had sold what he had prepared for today and tomorrow -- apparently he has a long night's work to get ready for tomorrows opening.

The picture is Dwayne Dopsie (pronounced doopsey) and the Zydeco Hellraisers -- an amazing, full energy show. A lot of hard beating favorite blues songs with a heavy bounce and lots of exclamation points. They quote a reviewer on their web site saying "Zydeco Powerhouse who plays high energy Zydeco at something approaching the speed of light."

I am hurting from a full day at the N'awlins fest -- they had about a dozen stages going simultaneously all over the French Quarter and Waldenberg Park -- so we did a lot of walking to take it all in.

What a neat closeup! Music takes talent, practice and showmanship!

I just cannot imagine living in a place where so much activity is going on like it does in New Orleans. It must be a kind of blessing.

We don't have it so good here. This Sunday morning it is all of 37 degrees here in SW Ohio where Tecumseh once ran on paths made by the wood buffalo.

We did get warm enough for a couple of days for daffodils and some crocus to pop up but they popped down again.

"Hellraisers"? I wonder what happened to the Zydeco TwIsters?

I'm sure the vendors are glad for all this business.

I'm lovin'this photo every time I return to it--which is often. hung da'Lede on todays Ladda.
I particularly enjoy the light inside his bellow, which of course is getting filtered through the fabric of the pleets. Amazing.
I mean really...that is One Rockin'Photograph! 'Course I know how hard it is to stay still in front of it all.
Go Steve.

I love the close up and the intensity with this photo! Wow!

beautiful work. I would give an arm and a leg to shoot something like this :DDD

Fantastic portrait, Steve. The highlights on the skin really make it.

Whoooeeee! What a great time this must have been. I'm lookin' forward to the Blues Fest that comes to us this summer--it's going to be out of sight!