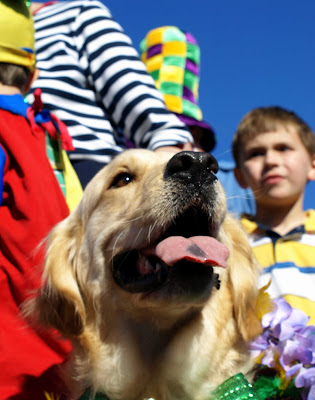 We were at the Mandeville Dog Parade on the lakefront yesterday. Not your typical parade. First off, the parade route was only a few feet wide -- with all the kids squeezing in to pet each dog as it went by, it was more of a snaky route than a straight one.

Second, there were more creative costumes than in any of the human marching parades. But clearly, costumed or not, the dogs were the main feature. They came in all sizes and shapes --Greyhounds to Pekinese and everything in between. The parade drew more than a couple thousand spectators -- much larger than I would have thought. We had to park and walk several blocks to get to the event.

This guy in the picture was my favorite -- he just look so happy to have his 2,000 closest friends around.

I love this photograph. Love the dog, of course. But I love how the dog is in the foreground and the background boy is just slightly out of focus - yet he's there. Yet the dog is the main focus.

This is a beautiful dog. I like the colored spot on his or her tongue too. The parade colors are nice.

What an amazing variety of parades you have. This must have been a fun one to attend.

Very nice. I used to have a dog that looked so much like him.

A perfect pose for this great look canine.

What a beautiful dog. I miss our big dog Sam. Now we have a little dog.