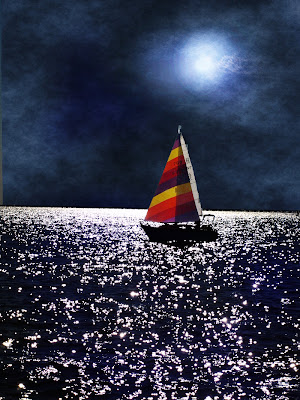 This photo is more surreal than real. I thought the photo needed just a little touching up and then a little more and a little more.... until it because this.

If you interested in what I did: The photo was a broad daylight shot, or at least late afternoon. The reflection on the water darkened the sail on the sailboat so I pulled it up in Gimp and used the scissor to select just the sail -- I like that tool because of it automatic form fitting alogrithm means I have to click on fewer points.

Then I selected the sky using the "Scissor" and then used "Filter| Render| Clouds| Plasma" to put a brightly colored sky in the scene. Then I used "Color|Desaturate" to take out all that color but leave the cloud-like effect.

Next came the "Color| Colorize" tool to change the sky to a blue hue and darken it down. It looked great now, but the reflection on the water looked out of place with out a moon. So I used the Airbrush tool with a fuzzy circle brush and a low opacity setting ( so I could make several passes and paint the moon in). I also changed the setting of the brush from "normal" to "overlay"

I went to town painting the moon using several different sizes of the brush first a large bright area, then a real bright center. Then using a very large brush I took quick passes around the moon to better blend it in. When I had what I wanted the moon still did not seem to blend it to well -- too much of a contrast difference. So I got a royal-bluish color on my brush and made a few passes -- I liked that so much I made some random passes around the sky with it --it added a better texture to the clouds.

While I had the brush like that I made a few passes over the water to add some blue.

What a romantic scene for Valentine's Day! Thanks for the instructions, but I'd never get around to all the different levels.

Oh, and your crawfish picture is making me salivate.

That's a lot of work but the result is great!

Happy Valentine's Day to you, Steve!

Hi Steve, I’m back after a short break… and lucky to get here on time to see such a beautiful picture! And the lobsters...
But the Mardi Gras pictures made my day!
Thanks for your comments at Blogtrotter
Wish you a happy Valentine’s Day!

Thank you for taking so much time and work to create the perfect Valentine Scene for us!!

Amazing shot!!! Congratulation and we wish more like this ;)))

This photo caught my eyes the best! I like the composition and the colors of course.
It makes the picture interesting now!

btw, thanks for commenting on my blog today.

It is like a fantasy photo, its look amazing